Best Books on the Bloomsbury Group

In 1905, the Bloomsbury Group began as a group of writers, artists and thinkers who came together at artist Vanessa Bell’s London home to discuss and share ideas as well as support each other’s creative work, forming firm friendships along the way. Lesser-known Vanessa Bell was Virginia Woolf’s sister.

The gathering quickly became a permanent fixture for the next 3 decades, taking the name ‘Bloomsbury’ as the majority worked or lived in town houses within the Bloomsbury district of London. They met on Thursdays and Fridays, and whilst their art was revolutionary, they were better known for their controversial ideas about lifestyle and societal living from sex, culture and liberalism. Most of them came from wealthy backgrounds. They challenged Victorian era norms and many of the members of the group had complicated relationships and affairs between them.

In 1917, Virginia Woolf and Leonard Woolf set up The Hogarth Press, publishing contemporary fiction written by Virginia Woolf herself, T.S. Eliot, Katherine Mansfield and E.M. Forster. They also published the translated works of Sigmund Freud, one of the most influential figures of the twentieth century.

(a) The Bloomsbury Group (Nonfiction) by Frances Spalding

I have found this to be one of the most comprehensive books on the Bloomsbury Group, discussing the significant influence group members had on culture, arts, design, society and ideologies during the two World Wars. The group of friends were almost rebellious challenging societal norms — everything from religion, art, and sex, Victorian Era legacies was overturned, kickstarting a fashionable revolution that hooked upcoming painters, artists, writers, designer and publishers of the time.

Written by art historian, Frances Spalding, this book explores the impact of each of the members of the Bloomsbury group and the lasting, permanent changes they left on culture over time.

A collection of 20 biographies authored by Frances Spalding covering the lives of Virginia and Leonard Woolf, Vanessa and Clive Bell, Duncan Grant, Lady Ottoline Morrell, Roger Fry, J.M. Keynes, Lytton Strachey and Dora Carrington. The writing is beautifully laced with painting and photographs of the members.

Another fascinating and wholesome account of the contemporary Bloomsbury Group including Virginia Woolf, Leonard Woolf, E.M. Forster, John Maynard Keynes, Vanessa Bell, Clive Bell, Duncan Grant and David Garnett. Chapters are written by a diverse range of experts in their field as they explore each personality, through essays and case studies focusing on themes of feminism, sexuality, class, philosophy, nature, the arts, fashion, culture, society and even Empire. An essential read if you want to get into the hearts and heads of the Bloomsbury Group. 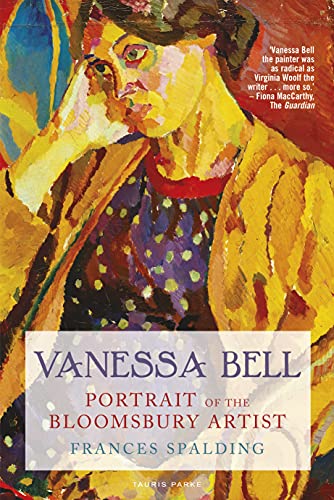 The beating heart of the Bloomsbury Group and Virginia Woolf’s sister, Vanessa Bell was a fascinating character who connected so many of the artists and thinkers of the Group. This book gives her an important light and space that was often overshadowed by her sister Woolf.

An artist and designer, this is an enchanting account of her charisma, charm and influence over the revolutionary movement and group that she nurtured. A fabulous read.

A slightly lesser-known residence of Vanessa Bell and the Bloomsbury Group in Charleston, Sussex Downs, this book captures Vanessa Bell’s and painter Duncan Grant’s lives in Charleston where they lived from 1916 onwards.

They beautiful transformed the house with their art and paintings creating a haven for the Bloomsbury Group. This book is authored by Vanessa’s son Quentin Bell and granddaughter Virginia Nicholson as they narrate the story of the family home and the people who spent time there, including their aunt, Virginia Woolf, economist Maynard Keynes, writer Lytton Strachey and art critic Roger Fry.

The book takes readers on a journey through the home, and how the space was used from the studios where plays were held, to the dining room where dinner parties were hosted and where great cultural figures such as T.S Eliot mingled. Virginia Nicholson also discusses sculpture, painting, embroidery and stencilling that were used to decorate the home.

This is a real treat for both art and literature lovers and one that you might devour in one sitting! I hope this has given you a helpful insight into the lives and work of the Bloomsbury Group.

Here are a couple of fiction books just in case you were interested in the actual literary works of the Bloomsbury Group members.

(a) To the Lighthouse (Fiction) by Virginia Woolf

I chose this book as it captures Woolf’s style of writing and the stream of consciousness technique she uses in her work. To the Lighthouse is a stunning novel set in the Isle of Skye, in the backdrop of World War 1, about a young girl transitioning from childhood to adulthood and the haunting power of memory after a series of devastating losses.

A page-turner, the book explores serious issues about love, embarrassment, guilt, ambivalence and conflicting feelings within families. Despite the sad themes, the book offers inspiration, hope and illustrates the power of forgiveness, affirming faith in family.

A comforting and beautiful book, it hits all the high notes for something that’s therapeutic and soothing.

E.M. Forster was another notable figure within the Bloomsbury Group and this is one of his most famous novels, set in colonial India. A great work of historical fiction, the protagonist, Dr Aziz, a young physician in the town of Chandrapore, meets Mrs Moore, at a local mosque. Mrs Moore, from England is travelling with Adela and they are desperate to see the ‘real India’ rather than the colonial one. Aziz, generously, takes them on a tour of the Marabar caves with his friend Cyril Fielding, however the trip kickstarts an unexpected turn of events, where Adela accuses Aziz of rape, leading to a high-profile court case in Chandrapore, further aggravating the tension between the British Empire and India’s independence movement.

A moving story that examines humanity and morality through the lens of anti-colonialism — it’s about acceptance and belonging regardless of our identity as an English woman or as an Indian native.

One of Forster’s masterpieces and named by Times magazine as one of the 100 greatest novels of our time.

A big hello and thank you for reading! Passionate about literature, psychology, and life I launched Book Therapy as an alternative form of therapy using the power of literature. I train other mental health professionals on using bibliotherapy in their own work through an online Bibliotherapy, Literature and Mental Health course as well as curate reading lists/personalised book prescriptions for clients based on their individual needs. This is my signature personalised reading service. You can also check out Book Therapy’s other free reading lists and A- Z of book prescriptions (covering both fiction and non-fiction). These suggest books based on your existing life situation (e.g. anxiety, job change, relationship heartache) as well as interests (e.g memoir, historical fiction, non-fiction, crime etc). There’s also a Children’s A — Z of Book Prescriptions. Feel free to check out the blog for more literary gems. There’s also a post on my personal story of how I entered the world of bibliotherapy and book curation. And if you’d like to connect, email me at bijal@booktherapy.io or www.booktherapy.io.